There is a saying “revenue is vanity, profit is sanity, cash is reality” which like most good quotes has seen the author lost to time. At its core, this quote is referring to the fact that there can often be large discrepancies between the profit reported through uniform accounting standards and the real-world cash generation of a business.

While reviewing the half-year results of ASX-listed enterprise resource planning software provider TechnologyOne (TNE) I was reminded of this quote. Look at this chart below which tracks TNE’s free cash flow (cash generated from the business minus any investment required to grow the business) against the reported net profit after tax figure through the business’s profit and loss statement: 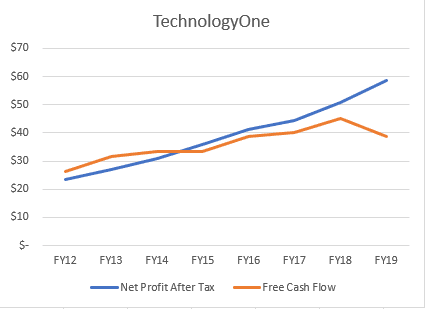 Woah! What happened at the end there? After five years of good (yet weakening) correlation between free cash flow and net profit after tax, this relationship began to break down in FY17 and FY18 and then severely crashed in FY19. The explanation is simple; in FY19 TNE changed their accounting standards which is the method they report net profit after tax.

Let’s start by looking at their profit and loss statement which provides the net profit after tax figure used above:

Without getting too deep into the weeds, TNE chose to use some flexibility in the accounting standards which allows companies to “capitalise” some or all of their product development. The logic behind this is the company is investing upfront to create an asset that will generate cash for the business in the future.

Specifically, $32.1m of R&D employees’ wages were moved from an upfront expense and instead became an asset which can be found on the balance sheet:

Like all operating assets, this new capitalised development asset is given a finite working life where it will slowly be written down, offset by any new development that is incurred in the future. Of course, these changes so far ignore the hard reality that TNE had to outlay $32.1m cash to those employees over the course of the year. Remember, “revenue is vanity, profit is sanity, cash is reality”. So, what does the cash flow statement show?

Unfortunately, if you are not paying close attention even the cash flow statement can be a bit misleading. The traditional definition of free cash flow is operating cash flow (number one above) minus capital expenditures for fixed assets (number two above).

This calculation shows TNE generating $74.5m in free cash and is the figure that is presented by most algorithms who only take numbers as reported. However, bear in mind the $32.1m paid to R&D employees which is now shifted down to the investing activities line (investment in a new asset) is an on-going cost:

TNE has spent roughly 20% of their revenue on R&D every year like clockwork. Given the cutthroat nature of software I expect that to be maintained in the future. I also expect those R&D employees will want to continue to be paid a salary, meaning we cannot ignore the payments for intangible assets line in the cash flow statement when trying to best understand the cash generation of the business.

By adjusting the free cash flow calculation (one minus two minus three above), I generated a new figure of $38.6m. This was a fall on the $45.2m in free cash flow earned in FY18 and a 35% difference compared to the reported net profit after tax in FY19.

A cynic would look at TNE’s FY19 result and suggest that the weak cashflow represents a deteriorating business and the management team have adopted a new accounting standard to try and mask that in their reported profits. Where I will give credit to TNE is they did not shy away from these changes, unlike most companies who bury accounting changes in the notes of their annual reports, TNE provided full like for like comparisons across FY18 and FY19 on new and old accounting standards.

But next time you open a company’s investor presentation and only see references to revenue and profits with adjustments made to them, stop and remember the saying; “revenue is vanity, profit is sanity, cash is reality”. A five-minute reconciliation of the cash flows of the business is usually enough to weed out the pretenders and find those with superior cash generating economics.

Finally, while this post has focused on a potentially negative example, at some point in the future I may write about the opposite; where uniform accounting standards mask great underlying cash generation and reported profits and price to earnings ratios won’t reflect the reality.