Sub-prime lending – the graveyard of the ASX 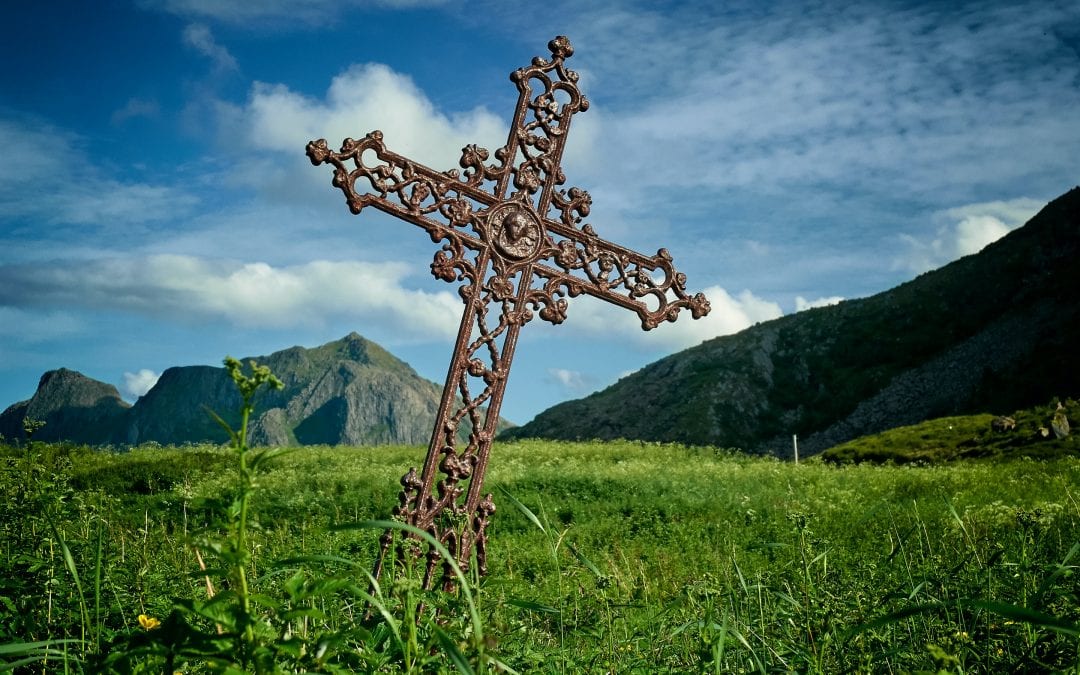 Last Friday, FlexiGroup and Prospa Group released trading updates to the ASX along with expected provisions they will take against their loan books as the Australian economy continues to battle Covid. These updates were stark reminders of how difficult it is to be a sub-prime lender in Australia and in particular how the sector has been a vacuum of capital destruction on the ASX. Look at this chart below with the ten-year post-GFC returns of a basket of sub-prime lending stocks: 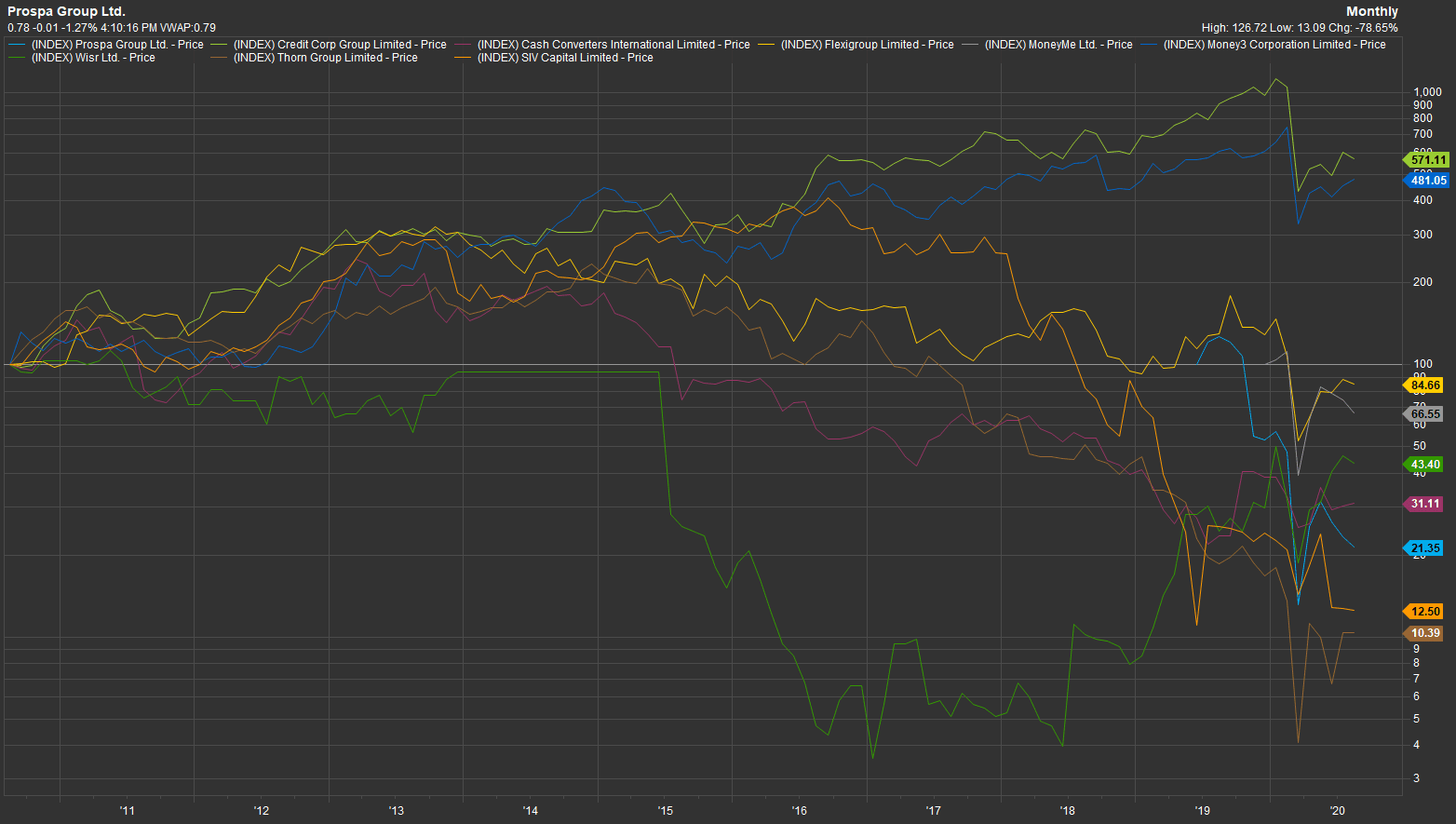 Credit to the two stocks that have performed well over this period; Credit Corp (held in the Oracle Emerging Companies Portfolio) and Money3. ~500% returns are certainly the exceptions to the rule where shareholders have lost money over ten years, with special mention to SIV Capital (the capital destroyer formally known as Silverchef) and Thorn Group who have both fallen in excess of 90%.

So, the question must be asked, with the track record shown above why do investors keep coming back to the sector? How was Prospa Group able to float only last year at a $600m valuation given the history of small business financiers?

The main reason is the market being fooled by the label of “fintech”. While the combination of financial services and technology is leading to some truly disruptive businesses (particularly in payments) when it comes to lending fintech is generally just an excuse for easier credit. Businesses claim to have some proprietary platform that allows them to manage risk better than peers (including the banks) which allows them to take on more loans faster. However, in reality they usually just have lower lending standards. As an example, look at how Prospa Group markets their technology in a recent investor presentation: 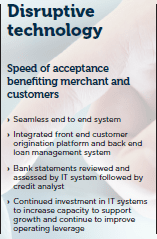 Technology is described as “disruptive”, “seamless” and “integrated”, speeding up the lending process for merchants and customers. But is the technology truly a competitive advantage or just a ploy to market easier credit standards to an unwitting ASX?

Sorry, I just realised I copied in the wrong presentation. The slide above came from Axsesstoday, a small business financier that floated in 2016, reported triple digit loan book and profit growth on the back of the technology platform described above before entering a trading halt in mid-2018 and not trading since. Unfortunately, I couldn’t include them in my chart before as Factset no longer has their data in the system. It seems the only thing the technology disrupted was the capital of shareholders who fell for the company’s spin.

To play fair to Prospa Group, here is an actual snip from one of their presentations describing their technology:

If falling for the fintech label is the main reason why the market is fooled by these lenders, a close second is rapid loan growth masking underlying problems with loan books. The issue here is a simple one; there is a delay between a loan being originated and it being formally classified as bad and doubtful to be received. This means when the percentage of bad debts is calculated and uses the current total loan book as a denominator it can be inflated with new loans that have yet to turn bad.

Let’s use a simple example based on Axsesstoday’s growth above. Assume a cohort of loans issued in any one year has a natural bad debts percentage of 10% but if the loan book is doubling every year, the reported bad debts percentage will effectively be half it’s “normal” rate at 5% as new loans that have yet turn bad are constantly being added and diluting older bad debts.

In a perfect world these businesses would be properly provisioning their loan books and bringing forward expected losses at the time loans are written, but given provisions are so subjective and rely on management assumptions they rarely provide the insurance they are supposed to in the space.

Where are we today?

As we enter an unprecedented economic outlook, it is interesting to see how different sub-prime lenders have reacted. We consider Credit Corp’s management to be head and shoulders best in the space, having survived the GFC and consistently overprovisioning their books compared to actual collection rates. When the impacts of the Covid response on the economy became clear, Credit Corp tightened their lending standards, focused on employment risk and began reviewing their book monthly. As a result, their new lending looks like this: 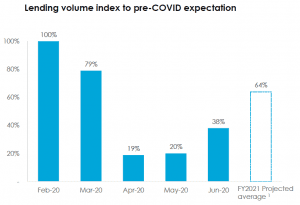 Looking across at some fintech lending peers, MoneyMe and Wizr (both servicing the same personal lending space) provided trading updates where their year on year loan origination rates were growing 52% and 92% respectively.

Is Credit Corp being too conservative? Are they too easily ceding market share to new competitors who are willing to lend in this environment? Maybe, it’s too early to say. But given the track record of the graveyard of the ASX I think I know which side I would back.