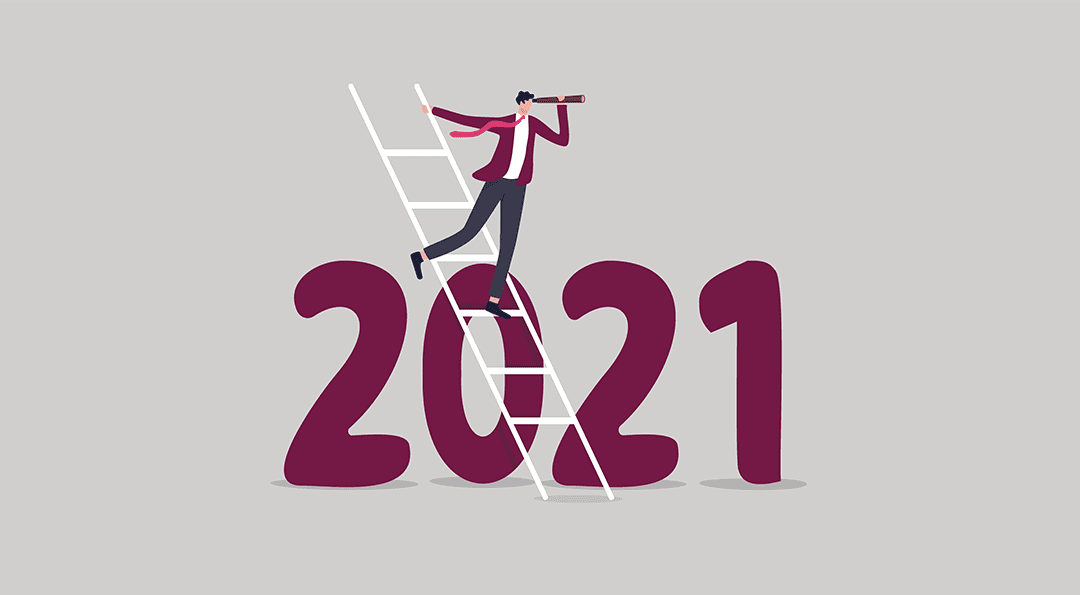 Starting the new year, the Oracle Investment team thought it would be a fun exercise to share some predictions with you for 2021.

These predictions are not supposed to represent our base case scenarios for the year, but rather promote thoughtful conversation on a range of topics that we may face in 2021.

Despite positive news and economic data, the ASX is flat to slightly down in 2021

Even though the market is often irrational and prone to wild swings of optimism and pessimism, it is exceptionally good at pricing known information. Many market participants have looked on in incredulity in 2020 as markets bottomed in March and began to rally strongly to levels which would seem insane to anyone earlier in the year.

However, when you consider what we “know” about 2021 and beyond, an argument can be made we have simply seen a large pull-forward of the recovery from the future.
What I believe the market “knows” (what is being priced in):

Given all the above, you would expect the market to rally hard again in 2021, but consider my point before. If the market already knows these things, they are already in the price. Because of that, I predict despite a constant flow of positive news and economic data, the market muddles along in 2021 and may even register a small down year.

2021 continues the recovery in the commodities cycle

Other than oil, 2020 has been a fantastic year for hard commodities, with most up 20-30% and iron ore putting those numbers to shame. Despite this, when I stumbled on the graph below on Twitter, I was amazed to see how small of a percentage commodities have become compared to other sectors: 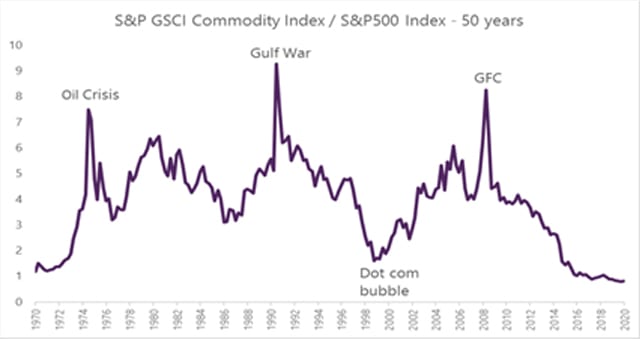 This is largely due to the collapse in the oil price and the growth of the tech sector, but it is worth noting that the current imbalance is at historical levels as investors have shunned cyclical stocks for those that offer better structural growth.

However, as I outlined in the first prediction, we are likely now entering a period of cyclical recovery and the macroeconomic backdrop for commodities seems positive as Governments around the world commit to fiscal spending on infrastructure. Beyond that however, our prediction is that we continue to see a recovery in commodity prices and equities as the market rotation gathers pace and money managers rush to gain exposures to cyclicals.

Probably not the boldest prediction as I think the shine has started to come off the sector in the last couple of months, but I predict we see substantial declines in the likes of Laybuy, Splitit, Sezzle and Openpay through 2021. Every year or two the ASX sees a mini bubble in a sub-sector, we have seen lithium, cannabis and bitcoin over the last few years and buy now pay later was added to that list in 2020.

The signs are all the same with incumbent players doing well, but seeing a bubble developing smaller peers rush to IPO to catch onto the exuberance and existing listed businesses pivot their business models or acquire a business in the space. I believe we have seen all of this with buy now pay later but when the party ends you see substantial losses with many of the smaller business going under.

A further complication for the “third tier” buy now pay later stocks is a much simpler one; they are struggling to generate a return on capital higher than their cost of capital even in mature markets with scale. In the end capitalism will win out and if returns can be generated in the space, they will naturally accrue to the large players which at this point in time seems to be APT and possibly Z1P.

With tensions rising between Australia and our largest trading partner, China, speculation has grown on what industry the Chinese government may target next. So far, they have targeted barley, wine and coal to name a few, and seem intent on continuing to flex their economic power in the region as a warning to other countries.

Two industries that the Chinese could target with relative ease are tourism and education because of the exhaustive list of similar destinations. Pre Covid-19 Australia welcomed 1.43m Chinese tourists per year and close to 200,000 Chinese students into our Universities. In 2019, the Chinese proportion of International Student enrolments was roughly 30% while China is now our largest source of International passenger arrivals, overtaking New Zealand. Additionally, China has used tourism to display displeasure with International partners before. A recent example was diverting tourists from South Korea after they installed the US designed THAAD missile defence system in response to tensions with North Korea. Chinese arrivals to South Korea fell by half over this period. If we continue down this path Australia may face a similar fate.

Market commentators have been increasingly wary that after years of low inflation, we could finally start to see a sustained period of rising prices. The thesis centres around the fact that rates are at zero or negative, so they cannot go much lower, and that unprecedented direct fiscal stimulus from governments around the world will eventually lead to inflation. The graph below shows consumers expectations of price increases are rising and the commodity market – another key indicator for inflation – has shown strength recently.

We respectfully disagree with this view, though as we think the Western world is heading for continued low interest rates and low inflation, as the forces driving lower inflation have not changed. Some of these forces include aging population, declining, or stagnating populations (think Japan), globalisation of labour, technology innovations, and high levels of debt. 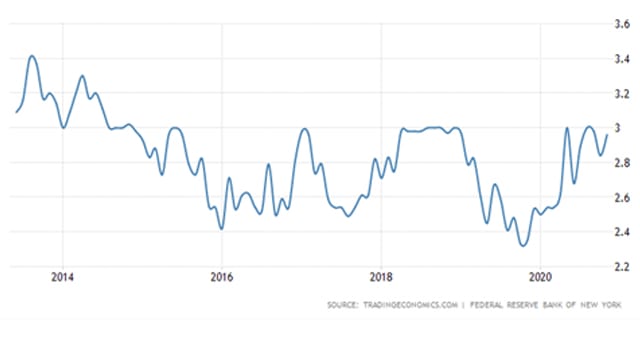 Whether this prediction comes true in 2021 is anyone’s guess, however we remain confident Joe Biden will be a one term president with Kamala Harris running in 2024 for President. However, we think there is a small possibility he steps down during this term due to health concerns.

In 2014, Scotland voted to become an independent country. At the time, they decided to stay in the UK with 55% voting no (2 million people) and 45% voting yes (1.6M). Today the landscape is very different to 2014 with Brexit and the handling of the Coronavirus top of mind. The Scottish National Party, and their leader Nicola Sturgeon, still adamantly believe in Independence and being a part of the Eurozone.

In the 2016 Brexit referendum, Scotland voted to remain (62% of the vote) and ever since then there have been growing murmurs of a second referendum. Currently over 50% of Scotland wants Independence according to opinion polls. We think its only a matter of time before a second referendum is held.

Tokyo Olympics to be postponed again

Relatively simple one, Coronavirus presents many logistical challenges with an event as large as the Olympics. Despite positive vaccine news, Covid-19 could continue to be a problem well into 2021 particularly for Northern hemisphere countries currently experiencing record infections.

Like tourism and education, it is not crazy to think the Chinese may target their biggest import from Australia, Iron ore. The argument from miners and investment analysts is that there is no alternative to Australian Iron ore production, but it is not hard to fathom the Chinese have made other arrangements.

These could include bringing production online in other countries or more likely large unrecorded stockpiles that could satisfy Chinese developers’ need for steel much longer than Australia could endure the economic pain.

It’s worth investing your time and talking to a Financial Advisor, to review your financial situation and ensure you have the correct strategies in place to aid in reaching your financial goals.

Important information – Oracle Advisory Group makes no representation or warranties as to the accuracy or completeness of any statement in it including, without limitation, any forecasts. The information in this document is general information only and is not based on the objectives, financial situation or needs of any particular investor. An investor should, before making any investment decisions, consider the appropriateness of the information in this document, and seek their own professional advice. Past performance is not a reliable indicator of future performance. The information provided in the document is current as the time of publication.